Data-in-transit is data as it is travelling between nodes. It is encrypted by default with mTLS. Data-at-rest is the data stored in your volumes as blob files. Encryption of these blob files is optional and can be enabled by adding a label to your volume definitions before they’re provisioned.

For information on how to enable encryption on your volumes, please see our Encryption Operations page.

How volumes are encrypted

Volumes are encrypted using AES-256 in the XTS-AES mode with 512-bit keys, as specified by IEEE Standard 1619-2007. There is a non-zero performance impact of using encrypted volumes. A 10-25% cost in read/write throughput can be expected from XTS-AES, dependent on workload. Thin provisioning still applies to encrypted volumes.

On PVC creation, if encryption is enabled, StorageOS will automatically generate up to two keys as Kubernetes secrets. Both keys are stored in the same namespace as the PVC.

Firstly, if it doesn’t already exist, a namespace key is generated. It is always named storageos-namespace-key and only one exists per namespace.

The encryption key is passed to StorageOS as part of the CSI volume creation request and is used to encrypt the volume.

The volume specific secret is needed whenever a volume is attached to a node for use by a pod. When this happens, the StorageOS node container’s Service Account reads the secret and passes it to the StorageOS controlplane.

A volume missing its key or with a malformed key will be unable to attach.

The key is stored in memory by StorageOS only on the node that the volume is being used on. As a result, encryption and decryption are performed where the data is consumed, rather than where it is stored.

Because of this, the use of encrypted volumes is transparent to the user. There is a complete integration between Kubernetes applications and StorageOS encryption.

Secrets are not garbage-collected by StorageOS. To clean up completely upon deletion of a volume it is necessary to also delete that volume’s secret. There is no benefit to doing this, however.

StorageOS encryption keys are stored within Etcd as Kubernetes secrets. Whilst the Etcd and kubernetes secrets can also be encrypted, many organisations choose to use an external KMS provider. 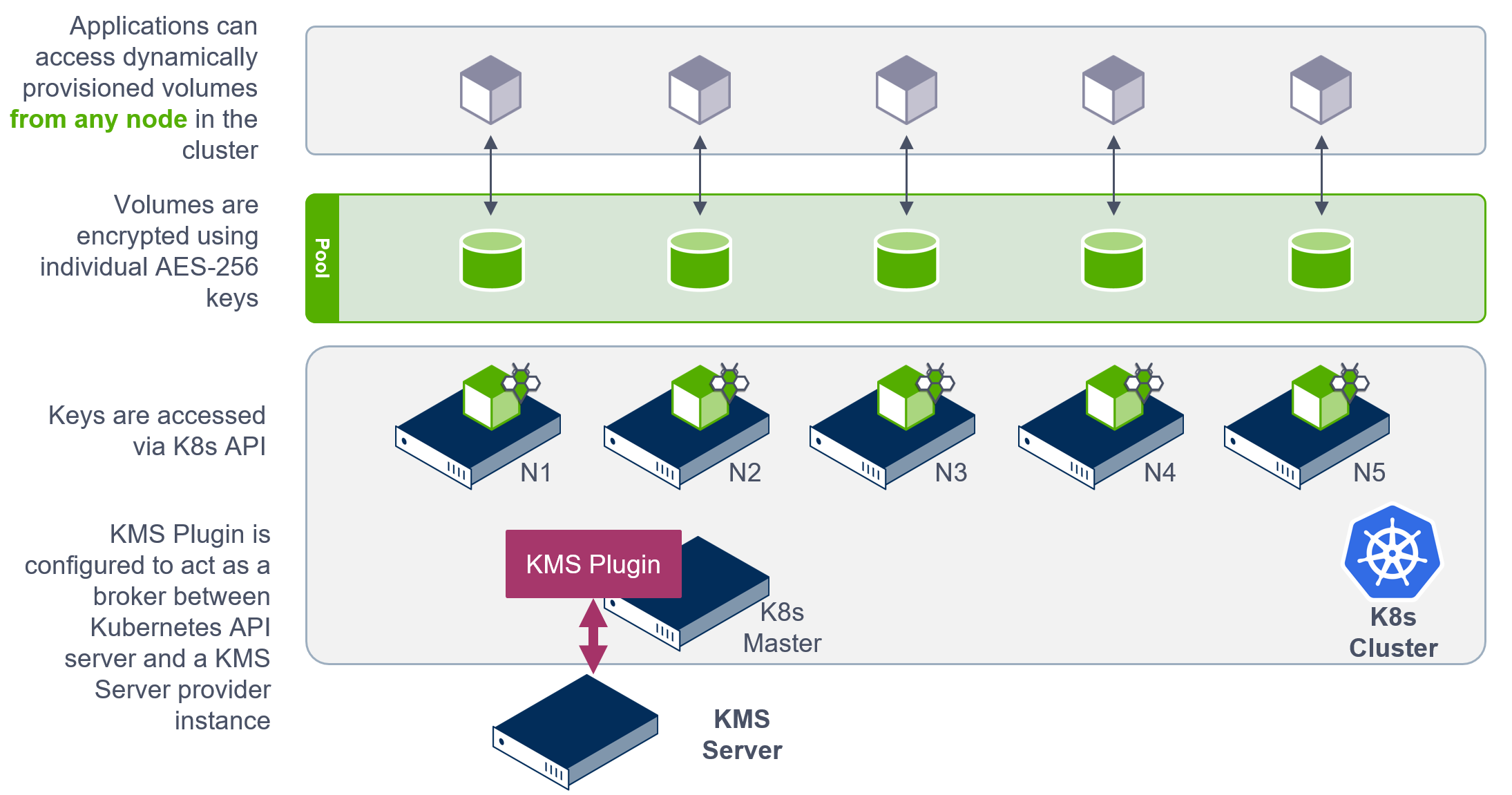